About two weeks ago, I began to read the book, “Oasis: Conversion Stories of Hollywood Legends” by Mary Claire Kendall. The book details the spiritual transformations of such actors like John Wayne, Lana Turner, and Alfred Hitchcock, to name just a few. 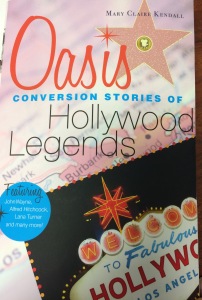 One of the lines that Ms. Kendall writes regarding the life of Alfred Hitchcock really stuck with me. In writing about the later years of his life, she says, “Sixty years earlier, Hitchcock’s eagerness for making films had trumped all…Now, with the Reagan era dawning and his health failing, the legendary director was focused on the greatest drama of all-that of Christ’s pure love and healing forgiveness.”

She later writes, “What this man, so utterly fascinated with all manner of human darkness and depravity, needed most, it turned out, was God’s light and grace.”

Perhaps I enjoyed reading Hitchcock’s story so much because he grew up Catholic and fell away from the faith, but—before feeling that longing in his heart—came back to it later in his life. There is a beautiful scene portrayed in the book, of a Mass celebrated in Hitchcock’s home—with volumes of his movies such as “The Birds” and “Psycho” right there in the room. He wasn’t a holy roller or a saint—not by any means—but he loved God and he found comfort in that before he died.

I think that there is something beautiful in that.

Have you read a faith-based book or biography that stayed with you? Please share!